Earlier this week, I was in Chad (African Country B). And I’m gonna come right out and say it – I had no involvement in the apparent coup attempt  that may or may not have occurred in the Chadian capital of N’Djamena yesterday.

Although news is still emerging about this attempt to “destabilize the institutions of the republic,” here’s what we know:

So in sum, there’s still a lot we don’t know. As an external observer, there are two conclusions I’ve come to:

Anyway, that’s my take on things. I’m headed to African Country C tomorrow, and it’s already shaping up to be quite an eventful week.

What I did in African Country A (Niger)

The jig is up! I’ve moved on from African Country A, which I wrote a bit about last week, so I can now tell you that I was in Niger. I got to do several cool things while I was there. 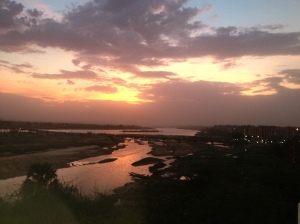 First, I got to be a fly on the wall during meetings with representatives of the youth movement, NGOs, and the media. There, I was privy to Nigerien civil society perspectives on the country’s trajectory, including the proactive measures President Mahamadou Issoufou had taken to mitigate spillover from instability in Libya and Mali, the country’s youth bulge and why youth engagement is so critical, fears over the spread of violent extremism from northern Nigeria into Maradi and Zinder, and instances of complicity in narcotrafficking among segments of the Nigerien political class.

Later in the week, I had the opportunity to observe a simulation of a hostage rescue by the Nigerien gendarmes.

During the simulation, I wandered into the structure where the “terrorists” were holding the “hostages,” not entirely aware that a full-scale assault was imminent. In the video that I took (which I’ve decided not to post here), you see the gendarmes entering, shooting two blanks, and the camera (held by me) diving instinctively towards the ground. Later on, I got to see how the unit apprehended some of the terrorists who escaped the initial operation, searched their vehicle, and had an evidence collection unit process the scene. Since I don’t have a law enforcement background and the United States doesn’t have an equivalent to gendarmerie, it was pretty cool to see how the simulation played out from start to finish. 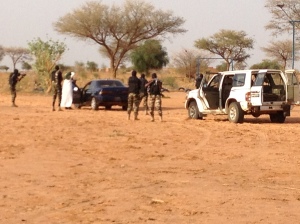 I insisted on visiting the Musée National du Niger, and although most of the pavilions were closed at the time, I did get to preview a forthcoming exhibit on the traditional dress of Niger’s Hausa, Songhai, and Tuareg populations. I also visited the Grande Mosquée de Niamey, which was very beautiful and offered a great view of part of the city from the minaret.

On my last night in Niamey, I was the guest speaker at the English Language Club at the U.S. Embassy’s American Cultural Center. I opened the session by talking about my identity as a first-generation American and then opened the session up to questions from the Nigerien audience. And let me tell you – these people gave me a run for my money! They asked me questions that covered topics from the patriotism and ethnic identity among other first generation Americans to gay rights to gun control to the politics of the climate change discourse in the United States. At the end, one of the participants asked me what I thought of Niamey and if I would return. “I’ve found Niamey quite charming, and YES I must return and experience more of the country.” I responded. “I’ve only just scratched the surface!”