I am an Africa foreign affairs analyst based in Washington, DC. I’ve previously focused on dynamics of armed conflict, human security, weak/failed states, and security cooperation while working at the Center for Complex Operations (CCO), the CNA Corporation, the Africa Center for Strategic Studies (ACSS), and the RAND Corporation.

I have a PhD in War Studies at Kings College London, where my dissertation focused on the disintegration of the military integration process in South Sudan between 2006 and 2013. I also completed a M.A. in Security Studies from the Edmund A. Walsh School of Foreign Service at Georgetown University and a B.A. in International Relations from Carleton College. While at Carleton, I received the David L. Boren National Security Education Program Scholarship to study abroad in Brazil and the Mellon-Mays Undergraduate Fellowship.

I am a Term Member of the Council on Foreign Relations, a 2018 Center for a New American Security Next Generation National Security Leaders Fellow, a 2018-2019 Penn Kemble Democracy Forum Fellow at the National Endowment for Democracy, a 2015 International Career Advancement Program (ICAP) Fellow, a Security Fellow at the Truman National Security Project, and a member of the Editorial Board for Parameters, the U.S. Army War College Quarterly. 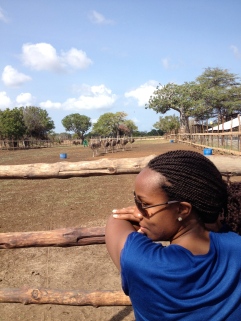 My interest in Africa has developed from multiple sources over several years – first as a member of the African diaspora (Yay Trinidad!), then through my undergraduate research on Afro-Brazilian political mobilization and the evolution of the dialogue on race in Brazil during the 20th century, and finally through my language studies in French, Portuguese, and Arabic which contributed to my career focus on Africa. I started this blog at the urging of my family – especially my sister, who is one of my mentors and many sources of inspiration. She blogs at A Life More Ordinary.

Lesley on Africa covers African politics and security, and occasionally, my reflections from travels on the continent. The opinions expressed in this blog are mine alone, and do not reflect the views of any organization with which I am affiliated.